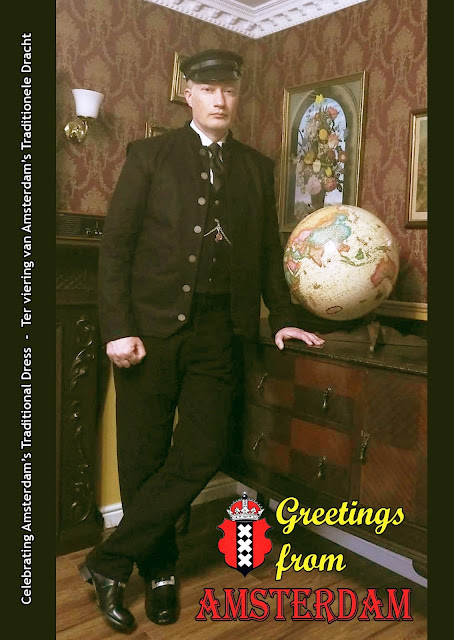 The Traditional Amsterdam Streekdracht still exists.
Traditional ethnic wear and traditional ethnic garments are still worn in The Netherlands. The Amsterdam male Streekdracht includes a black jacket with upstanding collar without lapels and the distinctive Pteryges shoulder design; a round-tipped white shirt; a high closing black vest (waistcoat); black trousers with permanent buttons for bretels, galgen (suspenders); a pet or klak (cap) with leather klep (brim) and forehead band attached with 2 silver dome buttons.
The jacket has a single row of 7 buttons and is lined with traditional North-Holland fabric. The 5 button vest is worn with a watch chain, watch and additional compass. The tie worn is a 19th-century crop-tie (straight unshaped cloth fixed with a bow knot), a modern long tie or even the university or company tie of your choosing.
With special occasions, a hoge hoed (high hat) has been worn too. Footwear can be klompen (clogs: garden/market/stables/rural), low shoes with silver gespen (buckles) or lace-up boots. As we now often live with central heating and are not necessarily going out to sea or work outside, we often make use of modern thinner fabrics. Apart from that, not much has changed about the design, cut and look of the Dracht in its late 19th-century design.


The jacket has evolved from the older traditional doublet jacket which was still worn until the first half of the 19th century. 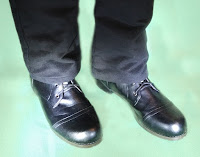 Lace-up shoes are the most popular choice.
They came about due to the labour circumstances of the industrial revolution.

Klak / Pet / Cap
Klak or Pet (cap) with leather klep (brim) and forehead band or rope attached with 2 silver dome buttons.
The idea of a rimmed hat protecting against the sun already existed long before the Petasos hat of the ancient Greeks. The god Hermes is always shown with the Petasos. Since then hats have always had a rim all around if needed. Next to rimmed hats, rimless hats and the soft muts (caps) have been worn. Soft caps have always been popular with traditional dress. Often and many times over it has been influenced by the Frygische muts (Phrygian cap), also worn by the Thracians and the god Mithras. In the Netherlands rimless soft caps have been worn until the first half of the 19th century. When the cap with only the front brim became popular is not entirely clear. It is possible that the driekantige steek (tricorne hat) or even the tweekantige steek (bicorne hat) with its folded rims caused the invention during the second half of the 18th century. Of course a much older hat much like a cap was the bekhoed (chapeau à bec or bycocket), a hat that was used by both men and women from the 13th to the 16th century. It had a wide brim that was turned up in the back and pointed in the front like a bird's beak. Famous wearers were of course Floris and Robin Hood. Early 19th century the cap with a front brim (better know as a klak) took over in many of the streekdrachten (regional dress) in the Netherlands. They were mostly entirely black. Every region and town has its own design. Of course, it must be clear that in some areas and towns the cap did not take over and rimmed and rimless hats kept their popularity.

Kachelpijp / High Hat
The Hoge Hoed (High Hat) was worn by some of the older generations but now only with special occasions. The high hat originated in England around 1797 and was adopted into many people's traditional dress next to their own head-wear. From 1800 until 1850 the hats were straight and better known as kachelpijpen (chimney pipes). In The Netherlands, they were manufactured from laken (wool fabric) and molton (mix wool and cotton) as well as the usual silk. However, silk and even ready-made silk hats were also imported from France and of course England. The hats had a bollint (ribbon) of 2 to 3 cm wide and made of laken (wool fabric) and later silk. From about 1830 the hats were up to 20 cm high. From 1837 until 1901 the norm was 16 to 17 cm tall. From around 1890 the hats got a tapered design with a larger kroon (crown). From around 1920 the hats became 12 to 13 cm high. Nowadays hats made of wool-vilt have taken over and very few manufacturers of silk hats have survived.


Possibly the last hat maker in The Netherlands:
https://www.lhiver.nl/digi_cms.php/13/home.html
https://youtu.be/ubnYShNQLPg

Zakdoek / Handkerchief / Neck-scarf
It is commonly known that before the stropdas (tie), the krop or scarf was popular, with its many ways of tying. Most have forgotten about the Zakdoek entirely and see it as something for those from rural areas. It is true that it is mostly seen in that setting. But this does not mean it is not a possible accessory for Amsterdammers to wear. It is worn on top of everything or worn with a shirt without a tie.

Zakmes / Pocket Knife
Work and eating knifes carried in the trouser-pocket are traditionally with silver handles. Most popular in the region was the “Leeuwtjesmes” (Lions-knife) originating from as early as the 17th century with a typical Dutch decoration of Acanthus leaves, shell decors and scrolls and with a lion with or without a shield. They had Netherlands hallmarks in the handles and originally had a blade crafted in the many traditional knife-maker towns of The Netherlands and Belgium. Later the blades were often replaced with steel blades from Solingen in Germany preferably from the Herder brand. Every area of The Netherlands (and Belgium) had its own design of pocket knife with the Leeuwtjesmes (Lions-knife) in North-Holland and Friesland and for instance the Paeremes (Horse knife) in the Zeeland coastal region.

Shady knife traditions
The knife brings us to the shady traditions of  The Netherlands: The knife fighting art named Bekkesnijden (Maul Cutting). The history of this phenomenon is described in a book:
Click here for more information. During the 19th century, it was subdued and became an illegal underground phenomenon. The name Bekkensnijder then slowly became a nickname and a word mistakenly used with any incident with which knifes, palm-blades or sharpened coins were used to cut one’s face. But don't worry: the Leeuwtjes mes (Lion-knife) in the pocket is now just an expression of tradition.

The Female Dracht
We are planning to make the female dracht popular again too. For this, a simplified modern version of the dress and headwear needs to be devised. More on this later.
If you are interested or able to help, please let us know.


Alternative Traditional Outfits popular in Amsterdam and The Netherlands


Maintaining and having traditional Amsterdam Dracht made is not a cheap matter. An often-used alternative is traditional fisherman's clothing. This includes a traditional jacket (internationally known as a pea-coat) and the traditional local designs of the schippers-trui (gansey).


For more information on the Netherlands schippers-trui (gansey), see the publications of Stella Ruhe on the designs and regions: http://www.stellaruheproducties.nl with as a perfect example of what we wear with the Durgerdam Gansey made by https://www.bluelooporiginals.com 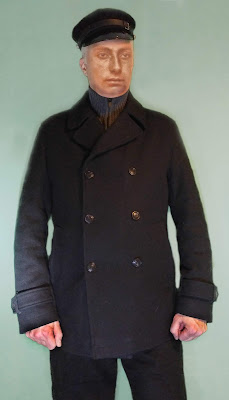 Alternative Traditional Outfits popular in Amsterdam and The Netherlands


Another popular but not necessarily cheap option is the traditional workingman's outfit which comes with trousers with suspenders, vest (waistcoat), traditional shirt with or without collar, cap of the same fabric, single or double-breasted jacket, or the typical and unique Netherlands Kletterjas / Cargadoorsjas as worn by kolendragers (coal-carriers) or other cargadoors (carrying or (bridge)pulling workmen). This outfit is entirely available from De Mof in Amsterdam and consists of clothing manufactured by Le Laboureur in France and a custom-made Kletterjas / Klouterjas / Cargadoorsjas created especially for The Netherlands market.