Tweed to Ae Rivers Hike route in the Scottish borders area.
With some Roman and Victorian locations.

Probably best to take a few days for this.
Also, make sure you book beforehand for some venues.

Book your visit to the
https://www.londonmithraeum.com/

How many days?
Most hikers I met along the wall try to minimise the number of days. If it's just about fitness and sport then I guess that is fine. But if you are actually interested in Roman history then it is wiser to slow things down at least so you can see everything. The itinerary I am showing here incorporates Corbridge Fort and Museum which is situated a bit south from the wall, and a full day at Vindolanda Fort and Museum. Vindolanda is close to the wall. Still a lot of hikers miss it as they arrive too late in the area on that particular walking day. A golden tip in this case is to quickly call a taxi on arrival that day and still have an hour or so at Vindolanda.
In my opinion a better scenario is to have a half day at Corbridge and a full day at Vindolanda.

Actually knowing what you are looking at during your hike!
There were 16 forts along Hadrian's Wall and a multitude of turrets (towers) and smaller mile forts/castles. Many of these can be seen and many of them cannot be seen. The stone wall can be seen on long stretches and on other stretches it has totally disappeared. Instead there can be traces of the ditches the Romans dug north and south of the wall or around forts. In several locations entire forts and mile castle foundations can be seen and here and there temples and a wall crossing. 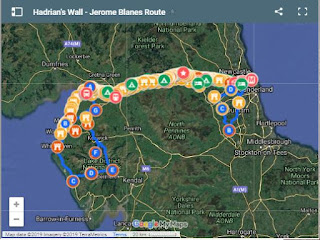 The maps and brochures that are for sale everywhere and you might possibly already have in your possession are far from detailed. During your walk they are practically useless. The official wall path even leads you totally the wrong way from Newcastle (along the river instead the wall) and near Carlisle (along the river instead the wall again). You will miss 5 very important visible sites near Newcastle and just as many sadly invisible near Carlisle. Invisible does not mean you can't know what was at that location! Knowing where you are is much more enjoyable than just walking unknowingly looking at flowers and grass. Therefore I advice you to use the digital map I have created for you with absolutely all the locations dotted out. All you need is a smartphone!
SCROLL ALL THE WAY DOWN FOR THE DIGITAL MAP

The all including itinerary!

POSSIBLE EXTRA FEATURE on this day is visiting 2 forts to the north of Hadrian's wall:
You have 2 options to fit this into your day:
- You can walk to Corbridge Roman town and Museum for a visit in the morning and take a taxi from there to the 2 forts in the afternoon, then let the taxi take you back again to where you are staying near or in Corbridge. Make sure you have cash for the taxi.
- You can walk to the Portgate Crossing on the wall (north from Corbridge) and call a Corbridge taxi from there to take you up and back and then to take you to Corbridge Roman town and Museum.
(Corbridge Taxis: +44 7747 670738)

ANOTHER POSSIBLE EXTRA FEATURE on this day is visiting Flavinus' tomb stone:
This grave stone of a Roman standard bearer from the 1st century was found in 1881 under part of the floor of Hexham Abbey. Dedicated to Flavinus with the insrciption: To the Venerated Departed: Here Lies Flavinus. A Horse Rider of the Cavalry Regiment of Petriana. Standard Bearer of the Troop of Candidus. Aged 25, of 7 Years Service
(Corbridge Taxis: +44 7747 670738. Or if you have time, take the train Corbridge - Hexham)


ANIMALS
Depending of the time of the year you will meet animals along your hike.
Mosquitoes and midges will be greeting you mostly on the west side of Carlisle along the river towards Beaumont. Bring some anti mosquito spray.
Cows with calves can be a bit troublesome. They are often put in fields near a farm but can sometimes also be further out. The mothers with calves can quickly walk up to scare you away. This can be really scary and they are faster than you think. If you wear a heavy backpack you won't outrun them. Luckily most cows will be nowhere near you and on the other side of fields and don't even think of approaching you. Only every now and then they will be waiting at precisely the gate you need to go through. Best is to climb the fence and walk through the neighbouring field past them. Even if they don't have calves and are in the way this is the best strategy. Don't worry, farmers know you will have to do this. It's not a problem.
Cow herds of 1-year-olds are sometimes put together in a field, mostly near farms. You will see that even if you walk outside their field they will all follow you. They are very curious and probably think you are a farmer. Very sweet but you really don't want to be in that field with them. So go around through a neighbouring field. I found that these situations are mostly in areas where you can simply also follow a road along the field.
Sheep are everywhere and are totally harmless. Mostly nowhere near you and they always walk away from you. A few times I have walked through fields near farms where a group of sheep followed me closely, made a lot of noise and thought I was the farmer. This is exceptional. But they are always very careful and totally harmless.
Dogs are hardly found on this route with the odd exception of locals walking them. Luckily people in this part of the country have well behaved and nice dogs (hunting-species, standbys and retrievers) so no worries there.
Flies are everywhere but are more interested in cow and sheep faeces. Do keep an eye out for the grey stinging flies though. There's not many of them but they can also be in fields without animals.

MUD
Lots of it. Even on a warm and nice day there will always be some muddy areas. Near farms and where there's cows there's large muddy patches and there are flooded fields on certain locations. The weather in this part of the country changes all the time as you will experience. Bring a super lightweight raincoat and think of a solution for walking in the mud. Most hikers I met along the way are not really ready for it. Even hiking shoes and gaiters are not really ready for it. The last time I walked the wall I wore army/police grade rubber overboots over my low hiking shoes, which is the only working solution. Fellow hikers joked they would steal them from me at night when I wasn't looking. Luckily that didn't happen.

Before I walked Hadrian´s Wall I had already decided to stay with the wall as much as possible. This meant not following the Hadrian´s Wall Path all the way down to the river. I am very glad I didn´t! I would have missed 5 important remains of the wall including a Roman Temple, a ditch crossing with stone built gate and several stretches of wall. All this between Newcastle and Heddon. The Hadrian´s Wall Path includes other unnecessary detours. Along the route there are several signs missing and all sorts of confusing situations caused by trying to follow nature instead of the wall and its history. Therefore I decided after I created the Antonine Wall Route, that I would create a modified Hadrian´s Wall Route as well. And also simply to be followed with a smartphone in your hand.
Modifications and Features:
- Showing all the Forts, Fortlets and Turrents along the Wall as well as all temporary camps in the area. When indicated in dark orange there are remains to be seen. When indicated light orange there are little or no remains. Knowing their location will however make your long distance hike more enjoyable.
- Direct route from Wallsend/Segedunum through Newcastle to Westgate Road following the wall.
- Avoiding the long detour along the river´s former industrial spots and all the way to Heddon.
- Alternative route to stay with the wall between Carlisle and Carlisle Airport, avoiding the detour.
- Additional Routes there where signage is unclear or missing. Follow the additional line!
- Additional Walk Route from/to Arbeia (South Shields - Wallsend Newcastle)
- Additional Walk Route along the coast from/to Bowness Mile Fortlet 5 (Cardurnock - Bowness)
- Additional Car Roundtrip Museum and Forts (incl the amazing Vinovium Fort Museum Binchester)
- Additional Car Roundtrip Museum and Forts (incl the amazing Mediobogdum Hardknott Fort)

Use the Google maps app on your smartphone to open the following map:
Jerome Blanes´ modified Hadrian´s Wall Hike:
https://drive.google.com/open?id=1txP4d86CoLX0zgklVNY_TajVTcdxypVc&usp=sharing

I walked the Roman Frontier Netherlands Hike from 21 April until 04 May 2019.
My extensive route visits all the Roman sites and Museums and follows the Frontier as close as possible.

The Dark Blue lines on the map are the Rhine river during Roman times and some connecting waterways.

The Limes route book that was published in 2019 in The Netherlands sadly again follows green areas instead of Roman history. Too many unnecessary detours that waste precious time that could be used for checking out Roman locations and Museums. But no worries, I have fixed this problem with my digital map:

6 - 11 February 2019 I visited Rome.
Map with Ancient Sites and Museums in Rome and some sites reachable in a one day trip:
Map Rome

As you can see on the map it is possible to walk to the Ciampino airport along the ancient Roman road and visit all the remains alongside it. A good idea on your last day in Rome when going home. The walk will take 3 to 4 hours. Add some time for visiting the sites and museums.

16 - 24 November 2018 I visited Athens.
Map with Ancient Sites and Museums in Athens and some sites reachable in a one day trip:
Map Athens

1st and 2nd of September 2018 I walked the Gask Ridge Walk - Lower Ridge.
I was hoping this would proof to be a great long distance route.
Sadly the 2 stretches of highway that need to be followed without any alternatives, killed the idea. The detour via Dubheads in order to get back to Roman road was also quite demotivating. To cut a long story short: You can walk this route, but I would suggest to do it in 3 days rather than 2. Sunny weather would make it a lot more enjoyable too, especially on the long stretches of nothingness. Bring a lot of water as sometimes there are no shops, no houses. Be prepared to be shocked by walking along 2 stretches of highway.

My suggestion is to rather do the car trip which i added to the map. It takes you to the 3 locations with actual visible Romans remains:

Unlike the route of Hadrian´s Wall in England, The Antonine Wall has no signage that is connecting the full route. There are signs, but only to some of the remains and only from local main roads. I have solved this problem for you by creating a full route map.

Use the Google maps app on your smartphone to open the following map:
Jerome Blanes´ full Antonine Wall Walk: